Heike Holstein successfully defended her National Champion title with a score of 68.043% in the Grand Prix class at the Slieve Bloom Stud National Dressage Championships in Cavan Equestrian Centre last weekend. The podium was completed by Rachel Dowley riding Cadens in 2nd place on 62.772% and Belinda Brereton riding Captain Negro C in 3rd place on 60.870%.

Heike was riding her 10-year-old homebred mare Sambuca by Samarant (by Sandro Hit) out of Astoria, with whom she recently secured Ireland’s first ever Olympic dressage team qualification alongside teammates Judy Reynolds (Vancouver K), Anna Merveldt (Esporim), and Kate Dwyer (Snowdon Faberge). “I was very happy with how relaxed Sambuca was, proving that she has matured a lot since Cavan last year. We had a few mistakes which were totally my fault but that’s good as I will learn from them and hopefully do those movements better in the future!” said the three-time Olympian, proving that the learning never stops even at the top level. Heike also commented that “The Slieve Bloom Stud National Dressage Championships was a fantastic weekend for the everyone, with great evening entertainment. I really enjoyed the trailblazers prize giving and getting to meet our future dressage stars! Thank you to the sponsors, organisers and volunteers who helped make the weekend such a success!”.

This year was special with Dressage Ireland celebrating 30 years since it was founded by Joan Keogh in 1989 as the Irish Dressage Society. Opening the pearl anniversary celebrations on the Friday night, equestrian journalist and commentator Paul Nolan gave an overview of the organisation’s history, illustrating Joan’s determination and commitment to the sport of dressage. Championships Co-Ordinator Jane Whitaker presented Joan Keogh with a beautiful pearl gift from Gelletlie Jewellers. The Girls in Green dressage team and their team trainer Johann Hinneman were also honoured at the celebrations and took part in a “Pearls of Wisdom” Q&A, hosted by international rider and trainer Dane Rawlins. Chairman of Horse Sport Ireland Joe Reynolds also gave a speech, commenting on recent achievements in Irish dressage and looking to the future with the 2020 Tokyo Olympics firmly in the sights.

At small tour level, Fiona Skipper won the Slieve Bloom Stud Intermédiare I championship riding Jumping Fox to a score of 65.221%. Fiona, who had never ridden at a national championships before and only moved over to Ireland from the UK earlier this year, commented that the horse hadn’t been out competing since qualifying due to work commitments but that they “might as well give it a go and have some fun.” Heike Holstein with her second horse Chameur scored 68.309% to win the Slieve Bloom Stud Prix St Georges championship. 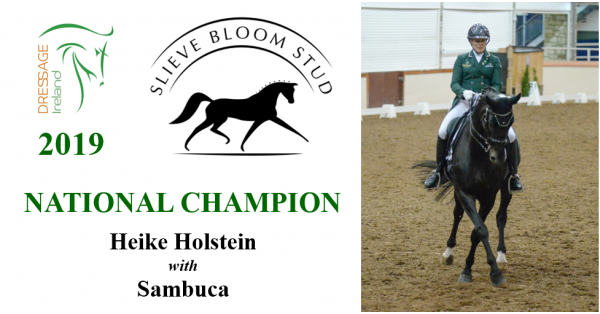 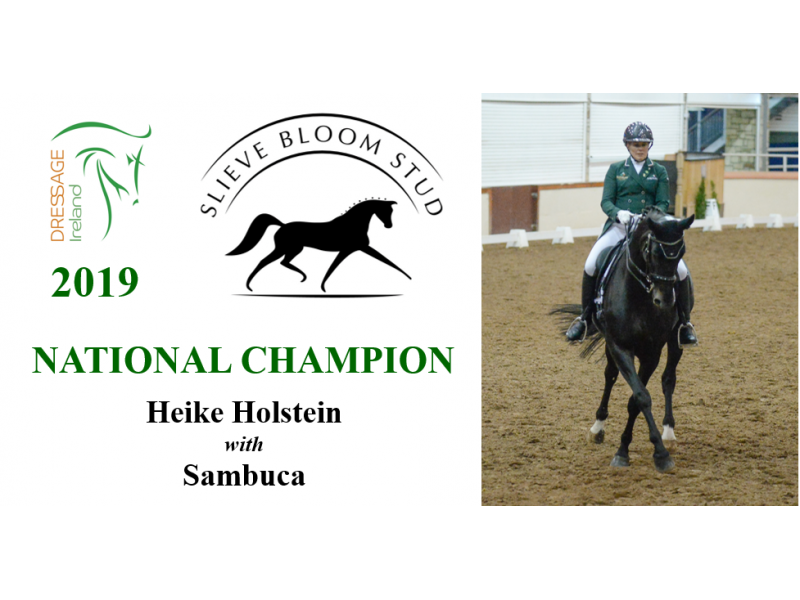